Domestic violence kills people and but whether you are aware of it or not, it also impacts the bottom line of your business. The statistics alone are shocking. Domestic and sexual violence affects one in three women and one in seven men. Like a rock thrown into a calm lake, there is a ripple effect that impacts entire communities. Intimate partner violence costs United States businesses an estimated $3 to $5 billion annually in lost time and productivity. As a business owner, you might not even know if your employees are victims because there is so much shame and embarrassment associated with it. What are some signs to look for?

And statistics back this up. According to the Department of Justice, women employees are more likely to be killed in the workplace by their partners rather than coworkers. As many as 75 percent of victims are harassed by partners at work. Twenty-seven percent of people lost their jobs as a direct result of domestic violence. And domestic violence does not discriminate based on age, social status, gender, education or race. It’s an equal opportunity offender. Domestic violence affects the workplace because the victim’s job represents independence and while the victim is there, they aren’t under the abuser’s control. But the victim is vulnerable at work because the abuser knows where they can find the employee during work hours. 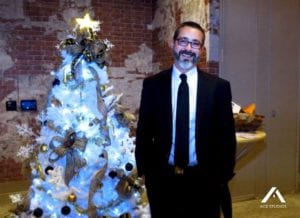 When I sat down with Executive Director of Safe Embrace, John Etchemendy and his Executive Assistant Jackie McKinney, they shared what makes their non-profit unique. Etchemendy said, “We have a very comprehensive program and are the only local domestic violence shelter with a therapist on staff. We have a dual focus of treating victims of sexual violence (rape) and domestic violence. We have a 24 hour crisis hotline and are the only shelter in all Nevada to house pets onsite. We have dogs, cats, ferrets and even a turtle. Nevada has led the nation for 20 years as one of the top five states for murders of wives and girlfriends. On our 24-hour crisis line we average between two to eight crisis calls daily. In 2016, 11 percent of the people who called and requested shelter in our facility received it. We have 15 beds in our shelter and people can stay for 90 days. With a staff of 9 we aren’t even coming close to being able to serve everyone that calls us. Our wait list grew to 67 women and children who were in abusive homes and wanted to leave but couldn’t.”

According to Etchemendy, “The population has nearly doubled in the last decade and is slated to do the same in the next decade but resources for domestic violence and sexual survivors really has remained stagnant. We receive no funding from the county or city. In Reno/Sparks

there are a total of 40 emergency shelter beds specific to the population of domestic violence. This is unacceptable to us. To help with this, we are in the planning stages of adding a new building at our shelter location that will add 16 beds among other amenities because we don’t want to turn people away. But we can’t do this alone.”

There are a few things you can do to help conquer domestic violence in our community:

Safe Embrace recently had a corporate donor who stopped by the Safe Embrace office with a check and didn’t want any recognition for it. Etchemendy explained, “Recognition is not about you gloating you are giving. It’s about letting other businesses and your clients know that you care. If your business gives to charity, you deserve recognition. It’s time for businesses to step up and help with this epidemic. We’d love to find ways to partner with your business.” Contact 775-324-3766 or safeembrace.org to learn more about how your donation can make a difference.