When selecting a university, students select the best choice to achieve their goals—especially in regard to careers upon graduation. WGU graduates credit their alma mater with providing better experiences and overall value than the national average, placing large emphasis on the quality of a competency-based education model in which WGU Nevada excels.

Gallup released the results of this study that compares the satisfaction and overall well-being of WGU graduates with graduates from other institutions in the United States. For the third year, the results demonstrate that WGU graduates are more likely to have the jobs they want, feel engaged at work and have an emotional attachment to the university.

“WGU graduates are twice as likely than other college graduates to say they had a mentor whoencouraged their goals and dreams,” said Brandon Busteed, Gallup’s Executive Director, Education and Workforce Development. “Given that Gallup has found this to be the single strongest element linked to long-term success in career and life, it’s a hugely positive outcome. It’s not about simply having an advisor who provides course selection tips. WGU graduates are being inspired and encouraged around their life goals and dreams. 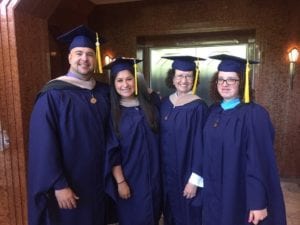 Photo (grads): WGU Nevada’s graduation was held Saturday, May 20, at The Smith Center where they honored over 400 graduates. The grad speakers were alumni Logan McDaniel, Samantha Brady, Cae Swanger and Carrie Brown.

According to the Gallup study:

“WGU Nevada excels at preparing its students for life outside of college following graduation,” said

The survey, which included 2,700 WGU graduates, compared the WGU responses to the national data included in the Gallup-Purdue Index. Gallup and Purdue developed the index to examine the long-term success of graduates as they pursue a good job and a better life. The index provides insight into the relationship between the college experience and whether college graduates have great jobs and great lives. 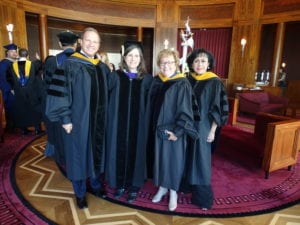 Photo (board): WGU Nevada’s graduation was held Saturday, May 20, at The Smith Center where they honored over 400 graduates. The photographed Board Members include Todd Sklamberg, Debbie Fowler, George Ann Rice, Sandy Colón-Peltyn

WGU Nevada offers more than 60 undergraduate and graduate degree programs in the high-demand career fields of business, K–12 teacher education, information technology, and health professions, including nursing. Degrees are granted under the accreditation of Western Governors University, which is accredited through the Northwest Commission on Colleges and Universities (NWCCU). A non-profit university, WGU Nevada is dedicated to offering affordable education to all—including those who do not have access to a standard brick and mortar establishment seeing as the WGU model is strictly online. In addition to WGU Nevada, there are five other WGU state-based, state-endorsed universities: WGU Indiana, established in June 2010; WGU Washington, established in April 2011; WGU Texas, established in August 2011; WGU Missouri, established in February 2013; and WGU Tennessee, established in July 2013.

WGU is a private, non-profit, online university based in Salt Lake City, UT. Go to wgu.edu for more information.