According to the Bureau of Labor Statistics, for the three million nurses working in healthcare, 1.2 million vacancies will emerge for registered nurses by 2022. By 2025, the shortfall is expected to be “more than twice as large as any nurse shortage in the mid-1960s,” according to a 2009 research paper by Vanderbilt University. Due to an aging Baby Boomer population and the number of nurses from that age group retiring, the nursing shortage is likely to continue. Dr. Patsy Ruchala is well aware of the urgent need for nurses. 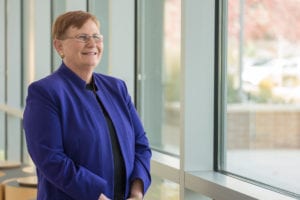 Ruchala was hired as director of the Orvis School of Nursing (OSN) at the University of Nevada, Reno (UNR) in 2004. At that time, Nevada had one of the lowest registered nurses to population ratio in the United States. The national average was 782 nurses for every 100,000 people while Nevada had just 520. During her tenure, she’s:

None of these achievements happened overnight. To fully understand what an undertaking this was, it’s helpful to know a bit of the School’s history. OSN opened its doors in 1957, and in 1992 it lost its independent status and was placed into the College of Human and Community Resources. Ruchala’s original intent was to stay at UNR for about five years and then move back to the Midwest to pursue a deanship. But, that didn’t happen. Instead, she fiercely fought to get OSN back to its independent status. It took her over a decade to do it, but it became a standalone school in 2016 when she became dean.

As the School celebrates its 60th anniversary and she prepares for retirement in 2018, Ruchala shared why nursing is so important and how she was able to transform OSN. Her leadership philosophy is deeply rooted in Rosalyn Carter’s famous quote: “A leader takes people where they want to go. A great leader takes people where they don’t necessarily want to go, but where they ought to be.” Those words have stuck with her throughout not only her tenure here but throughout her career.

When Ruchala came on board in 2004, OSN was in a tough spot. At that time, the passage rate of nurses was about 63 percent compared to today’s passing rate of about 93 percent. Another pressing issue was (and continues to be) the nursing shortage. Ruchala knew she needed to act quickly to bring that pass rate up to provide the community with top quality nurses. Ruchala shared, “Change is hard, and there was resistance to thinking that the curriculum that the faculty members were teaching from really wasn’t giving our students what they needed. Our alumni wanted to see this be a better school and were very supportive of curriculum change.”

She appointed a task force to review the curriculum and changes were implemented rapidly in the evidence-based curriculum in January 2006. Other changes included being more proactive and identifying the student’s needs and deficiencies up front. They now have a clinical improvement plan which allows students to improve upon something they may be struggling with during a specific timeframe. Faculty work directly with the student to make the improvement. This has also greatly impacted the low two percent attrition rate which allows for a high completion rate.

Ruchala believes in providing faculty opportunities to attend national conferences where they have exposure to different ideas and can learn how other nursing programs across the nation are working. Even though OSN is relatively small compared to other nursing schools and Reno isn’t in a large metropolitan area, innovative ideas can be incorporated into the curriculum when it comes to best practices. In addition to its focus on clinical practice, research is a crucial component to its continued success. In 2010, a faculty member received one of the OSN’s first research grants from the National Institute of Nursing Research. Ruchala views research productivity to be a priority while continuing to maintain the rigor of their academic programs.

The executive search is now on to recruit a new dean for OSN as Ruchala prepares for retirement and going back to the Midwest. She shared that she has been preparing her exit strategy from day one. “When a leader leaves a position they should leave that organization well placed to carry on without them. If a leader is indispensable and an organization can’t run smoothly without them, I think there is a problem. I have worked on developing our leadership and organizational structure for OSN. We are at a point where we have a great infrastructure in relation to the leadership.”

In closing, Ruchala shared, “We are in the business of education and providing ity. Our graduates are not only here in the community, they are across the state and country. We have international graduates as well and nurses in leadership positions across the country. I am very proud of the product that we produce in relation to our students, graduates and practicing nurses.”