Although Reno’s East 4th Street has a checkered past, the former Lincoln Highway was once a main east-west corridor through Reno. As the landscape changed and blight moved in, buildings along East 4th Street sat vacant and fell into disrepair. Besides better connecting downtown Reno and downtown Sparks, The RTC 4th Street/Prater Way RAPID Transit Project is set to revitalize 4th Street while preserving its rich history. There is a diverse mix of people due to the industrial nature of the area, motels and homeless shelters. In recent years, a brewery arts district has emerged on 4th Street which includes Under the Rose, Lead Dog Brewing Company, several wineries, and The Depot.

Most people aren’t aware that prolific architect, Frederic DeLongchamps, designed some of the most prominent buildings along East 4th Street and throughout Nevada. To name a few, the Washoe County Courthouse, Lyon County Courthouse, Fallon City Hall, the Riverside Hotel and the US Post Office-Reno Main. Architect DeLongchamps designed the Nevada-California-Oregon Railroad Depot (built in 1910) that Reno local Chris Shanks purchased in 2013. Because it was once a vibrant train station, Shanks wanted to keep that original vibe throughout. Despite sitting vacant for 23 years, it took only about nine months to renovate. Features include original beams, original wooden staircase, refinished beachwood floors, subway tiles, a vault in the men’s bathroom, maps of the old train station on the walls and all original doors and casework.

When asked about taking a risk by starting a business on East 4th Street he noted, “I am a firm believer that the more similar uses you have in an area the better it is for the area because you have more people traveling to that destination. It gives people a compelling reason to come to 4th Street. The nearby homeless shelter is more of a visible deterrent than an actual safety concern.” 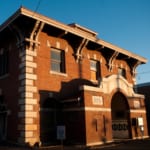 The Depot is a distillery, brewery and restaurant. Eighty percent of their grains for their whiskeys come from northern Nevada. They use a “farm to glass” approach when it comes to distilling. As far as local competition in the craft beer market, Shanks explained, “The consumer is getting so much more educated. The more competition, the better you have to be and the better it is for the consumer.” Co-founder and brewmaster Brandon Wright earned his credentials at the World Brewing Academy in Chicago. “We always talked about starting our own businesses, the stars aligned with me getting the restaurant experience at Louis Basque Corner and Brandon getting brewing experience in San Diego where he worked with some bigger breweries. That is the genesis of what you have now,” Shanks shared.

Across the street, the idea of the Record Street Brewing Company (slated to open this summer), all started about four years ago with a backyard BBQ, a crisp, refreshing craft brew, and a dream of opening a brewery. Matt Robison, a home brewer, brought the beer that sparked the conversation with Jesse Corletto. After that encounter, Corletto contacted Patrick Ogle who would become his co-founder. Ogle said he was in, however, they needed to purchase a building. Corletto noticed that Midtown was quickly evolving, however, East 4th Street wasn’t experiencing that same kind of renaissance.

Corletto pinpointed the vacant Alpine Glass Company to be the brewery location. There was one problem though. He couldn’t find out who the owner was. He eventually discovered the owner Kenneth Kruger sold the glass business 20 years ago by, but not the building. He tracked down Kruger’s address. He drove to his Midtown home and then proceeded to the front porch. That’s when Kruger answered the door holding a shotgun. Corletto nervously introduced himself and asked if he still owned the Alpine Glass Company building. That’s when Kruger shut the door. As he turned to leave, Kruger came around from the back and handed his son Daniel’s phone number. He said, “You can call him about the building.”

Ironically, when Corletto spoke to his son he said they were discussing demolishing the building and giving it to the city of Reno for a parking lot. They worked out a deal and helped Kruger clean out the warehouse which was basically a storage facility for his personal items for nearly 20 years. Kruger died at age 83 earlier this year. They cleared out lots of material from the 1928 building while being careful to preserve the history as it was designed by architect DeLongchamps.

Now that they had beer and a building, they needed a name. Their original intent was Reno Brewing Company but that was taken. As Corletto stood in the parking lot and looked up at the street sign, Record Street he knew right then that would be the brewery’s name. He explained, “It made sense. What we planned to open was a brewery. Music would be an important element to that. I am a music fanatic who grew up playing base guitar and listening to vinyl records. By adding music to the brand it makes a great connection with the consumer.”

Record Street is different from other brewers in the area as they aren’t brewing beer in Reno now. While they plan to brew small batches at the Reno location, most of their brewing will remain out of state. District Sales Manager Joe Martinez, noted, “Our concern was quality, consistency and logistics. Mendocino Brewing Company, one of the founders of the craft beer market back in the 1980s, met all those criteria. We have released three of our flagship beers so people now can experience Record Street even before we open our doors.”