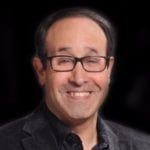 Elvis, Marilyn and the Space Aliens: Icons on Screen in Nevada
by Robin Holabird
University of Nevada Press, $24.95, 248 pages

Robin Holabird makes a credible case for Nevada being the epicenter of the movie universe, just behind Hollywood. A former director of the Nevada Film Office and a regular film reviewer for Reno Public Radio, Holabird brings an encyclopedic knowledge of television and film industry history to this book, especially those projects either filmed in or taking place anywhere in Nevada.

Holabird’s book is a rollicking romp through movie history using Nevada as a backdrop and primary inspiration. The book starts out with Elvis Presley and the only movie he made in Nevada, Viva Las Vegas (1964). This was a signature Elvis movie, billed as one of his best because it was directed by veteran movie maker George Sidney (Anchors Aweigh, Show Boat) and co-starred the glittering Ann-Margaret. The title song and the intense screen magnetism of Elvis and Ann-Margaret set millions of fans on fire. And if Elvis is the once and future king, then Holabird shows us that Las Vegas is “his glittery Camelot.” Both Elvis and Las Vegas were in the prime of their youth in 1964, both grew up together and defined each other. A host of impersonators followed, along with a selection of documentaries and flashy biopics featuring the mega-star and the city.

Up north in Reno the reigning queen of the movies, Marilyn Monroe made her last film with co-star Clark Gable, The Misfits (1961). Fabled as the divorce capital of the world, Reno was defined by famed American playwright Arthur Miller (Death of a Salesman, The Crucible). He wrote the screenplay to the movie after completing a six-week residency in Nevada so he could divorce his wife and marry Marilyn.

Area 51 in Lincoln County is location of choice for an army of space aliens who have touched down in Nevada. The 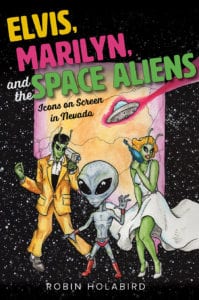 movies have taken notice and such films as Indiana Jones and the Kingdom of the Crystal Skull (2008), Independence Day (1996), Starman (1984), and, Race to Witch Mountain (2009) all featured this location at some point in their storylines. Holabird embellishes the back story by interviewing the proprietor of Little A’le’Inn, a hotel in Rachel, NV that is a remote outpost for moviemakers. Asked if she ever saw an alien before, the answer comes quickly: three times there were space aliens looking like regular people who visited the establishment. One stayed a few days and never ate or used a restroom. A different alien “knew surprising things and foretold the future.”

What is so special about Nevada that it attracts so much cinematic attention? Nevada means old West for the Cartwrights and their long-running TV series Bonanza. A map of northern Nevada was displayed on TV screens every Sunday night, and it burst into flames. John Wayne, iconic cowboy, filmed his last movie at Carson City, The Shootist (1976). And independent filmmaker Jim Jarmusch (Stranger than Paradise, Down By Law) featured Johnny Depp in Dead Man (1995). Depp takes the Virginia and Truckee Railroad to the end of the line to a fictional town called Machine, a stand-in for Gold Hill, NV. He proceeds to have a series of surreal and twisted experiences in what has been dubbed “a psychedelic Western.”

Nevada means new West to gangsters like the Corleones in two Godfather movies set partially in Las Vegas and Lake Tahoe, and those in films such as Goodfellas (1990), Bugsy (1991), and Casino (1995). There is Rocky Balboa who visited the state in the Rocky series, and even James Bond 007 made an appearance in Las Vegas in Diamonds are Forever (1971).

And Nevada means Future West for such projects as the Transformers series and the cult underground classic The Amazing Colossal Man (1957). Nevada thrives on promoting the forbidden, things like gambling, divorce, boxing, quick marriages, and legal brothels. Open space, open minds, and as Holabird shows us a unique spin on stories set in the state featuring “intense and iconic characters.”

Read Holabird’s fun and entertaining book and become enlightened on all things Nevada in the film world, and you will never look at locations such as Las Vegas, Reno, Lake Tahoe, and Area 51 and the Atomic Test Site in the same way again.

Eric L. Miller is a writer and digital marketing consultant based in Reno, NV. You can contact him at eric@3ibooks.com.

Press Room 20 Apr 2019 5 comments Contruction
Directly southwest of Reno lies a cautionary tale for Northern Nevada. California is in the throes of a deep, and seemingly unsolvable, housing crisis. Home prices have skyrocketed so far…